On December 21, 2012 at 12:37PM PST, asteroid K2-5387 commonly known as Asteroid Helen, crashed into the North Pacific Ocean. It was dubbed Ground Zero afterwards, located under three hundred miles from Alaska’s coastline at location 55°41’08.8″N 144°25’29.2”W, just short of the tectonic shelf, and east of Kodiak, AK. This is never forgotten, even when it changed the earth and its dominant species forever. At least, that’s what we know as of now. Let’s recap on what has happened after the crash.

Before it messed up everybody’s lives, it had been a hot topic of speculation since Dr. Maggie Helen discovered it in Hawaii on October 22, 2010, while conducting imaging data for Project Starscape. Every single human—old, young, intelligent, ignorant, and superstitious—had some thought of what its discovery meant and each one polarized another. But the ideal notion on everybody’s head was the movie industry’s fantasy coming to life, played out until people got sick of it within a week: asteroid found, humans panic, religions clash and outcry in public and gruesome demonstrations, and either blown up by oil drillers, astronauts, or plain old faith. That last part is all fantasy. Many governments discussed sending nuclear missiles to blast it away, despite the implications the science community repeated, but that was soon disbanded once countries fought over who would press that ‘Launch’ button. Astronomers calculated the asteroid’s path, published the results, and made sure to everybody that science will prevail.

K2-5387’s trajectory and velocity, along with Earth’s solar orbit speed of 66,000 MPH, the planet will dodge it on December 21. Coincidence that the date is synonymous to doomsday-preachers and in relation to the Mayan calendar. Yet the ancient calendar worked in cycles, not the end of human life. For two years, the entire planet held their breath, and the earth’s inhabitants waited, and studied it.

Asteroid Helen’s surface was, for the lack of a better term, unforgiving. Terrain was mostly sharp spikes of iron ferrite and silica-made glass, charred black and glistening by starlight, which was blasted and melted back from solar heat, making the metal and glass structures malleable as clay, and frozen by below zero space. Other areas were flat, sooth rock plains that were clear enough from the spikes, but were made of denser rock, which was how Jaruka Teal managed to find his landing spot behind the asteroid and out of view from earth’s satellites. And when the asteroid rotated on its axis, Jaruka increases his ship’s cloaking technology. The asteroid was active also, geysers when exposed to heat spewed toxic fumes and ice crystals into space that some stayed behind by the asteroid’s own gravity, yet trailed behind in a green and purple tail.

Months of study and breath holding, and for a few hours, it did pass earth, until it made a sudden ninety degree turn toward the Pacific Ocean.

It entered the earth’s atmosphere, screaming over South and North America at beyond the speed of sound. The land shook under people’s feet. Glass from cars and buildings shattered from the sonic blast, even buildings that could withstand a 7.0 earthquake along the San Andreas fault line were reduced to rubble.

It crashed into the earth’s crust, the tidal wave or wall of fire was prevented somehow, white light erupted into a column into the sky, and an expanding purple ring that sent an uncountable amount of Wave crystals in its wake across the planet’s surface, varying in size and shape. But even more mysterious, and familiar to all, was that Asteroid Helen was shrouded in a dome-shaped cloud 20 miles high and 40 miles wide. Intense seismic activity was recorded too that it was felt across the American coast, but low and nonthreatening. Scientists worried the asteroid was still “active” and was burrowing through the earth’s crust. Some speculated the constant earthquakes would bring the Alaskan coastline under water. It didn’t, but people feared that thought.

The cloud cover over Ground Zero was pure white, but thick and impenetrable by sonar, radar, or infrared. The clouds rotated counter-clockwise. A mile out from the dome, intense ocean waves and riptides turned the surrounding ocean into a torrential death trap. Political stances played on who wanted to monitor Ground Zero for national security. American, Russian, Korean, Chinese and Japanese navy ships circled the area, running distant tests and surveys to understand what was really happening inside the dome. Many speculated, since terran magic was coming into view in professional and amateur journalism and in some cases in practice, that Ground Zero was shrouded in magic. If terran magic was studied late winter, technicians could determine the amount of energy Ground Zero emanated, levels to turn even the tannest of human bone white.

Probes were floated into it, but were destroyed by the circling rapids, then letting the inward riptides take the pieces through the dome. Days later after Jaruka made camp near Lake Skinner in Temecula, CA, an American battleship was suddenly hit by an electromagnetic pulse from the dome; people speculated from afar. The waves drew the ship in by its stern. Most of the crew evacuated by life raft before it reached the outer ring. The waves slammed and ripped through the hull like paper, and its top disintegrated into sand as the bow grazed the dome. The remaining crew on the ship, unable to escape the ship, suffered intense magical energies that their bodies merged with the steel, or ripped part from the inside. The dome swallowed the ship, never to be seen again.

By sanction of the U.N., no military, civilian, fishing or shipping vessel, or aircraft of any affiliation were permitted in the 60 mile wide restricted zone. Shoot on sight was encouraged. But that did not stop sea creatures circling Ground Zero, even the mighty blue whales singling to it.

So far, from the crash until April, Ground Zero acted the same state, unrelenting in its act. In many ways, it acted just as a terran transformation. Patience passed, and Ground Zero finally settled down.

The area was still under scientific examination and strict restrictive laws, but once the cloud dome dissipated and the waves and riptides turned to calm waters, an island was revealed. Surveillance reports stated the asteroid raised the underwater land 6,000ft as jagged mountains much like the asteroid’s surface in space, then flowed down to a bordering white sand beach. The mountains surrounded the largest Wave Crystal on the planet, towering over 30,000ft, perfectly perpendicular to the planet. Within minutes of being revealed, plants grew along the mountains.

Once people landed on the island for study, they found an intricate tunnel system through the ring mountain, leading toward the center. Nobody found find the remains of the ship still. 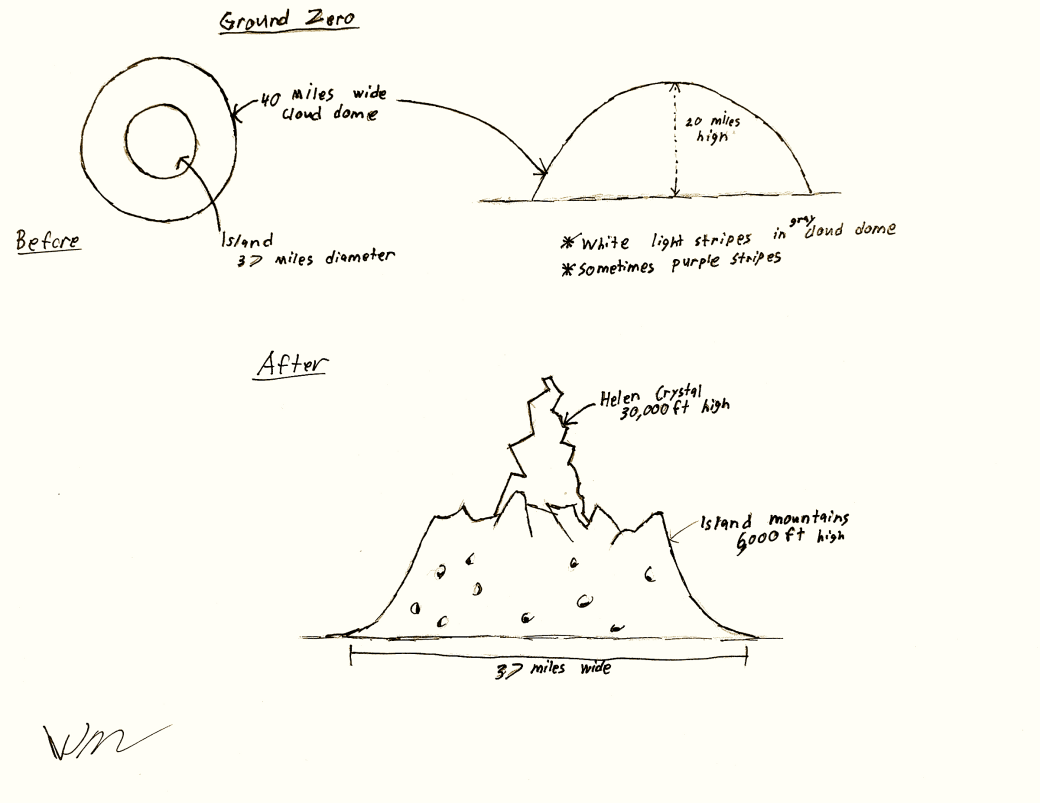 Contested for responsibility and restricted to only military personnel, the island is the stark reminder of earth’s change. Who knows what other secrets the monolith crystal contains.